March grand Sumo tournament will be held on March 12, Sunday Today!
This time is the first tournament after Kisenosato promoted to Yokozuna, so Sumo is getting more exciting!

I attended a seminar about Sumo which Mr. Katsuhiko Shimomura, Chairman of Shizuoka Sumo Association gave a lecture.

It was so interesting and profound!
Let me intoroduce Mr. Katsuhiko Shimomura.
Mr. Katsuhiko Simomura was born in Yaizu-city.
He made many achievements on Sumo activities.
When he was a stundent, he got meny titles and gave the demonstration of Sumo performance in 1964 Olympic!!!

He has been working hard on promotion and progress of Sumo and he also has been making efforts on international excange through Sumo.

Mr. Shimomura said,
"Originally, Sumo came out of simple measure strength people-to-people. Next it became the ceremony of the pray for the productiveness of grain. In Nara period, Sumo was introduced into the ceremonies of Imperial Court. Gradually, Sumo added the game feature. In Edo period, the game rules were set and Sumo continues to this day."


Sumo was completed over many generations and it will be handed down to the future.
When I see the visitors at Kokugikan(Main Sumo Stadium of Tokyo), so many visitors from abroad watch Sumo.
I think it wonderful that the people all over the world love Sumo crossover!!


The ring entering ceremony of new Yokozuna Kisenosato is "Unryu"style.
I see that Sumo entering is sacred ceremony since Mawashi of Yokozuna has the Kamishide.
(Mawashi is a Sumo wrestler's uniform and Kamishide the is holy mark)

I asked Mr. Shimomura "What is the meaning of the ring entering ceremony of Yokozuna?"
He replied that " It means Ground purifying. If powerful Yokozuna steps the ground, the Sumo ground will be purified"

They are holy and legendary.

Yaizu-city has many connections to Sumo.
In old times, Yaizu was convenient as it was near from the station of Tokaido line in order that Sumo make a tour the region.

Iwasei has some handprints of Sumo wrestlers.
↓↓↓

They are so big！


The 44th very famous and strong Yokozuna, Tochinishiki handprint.
I will hang this on the wall in our main store during the tournament. 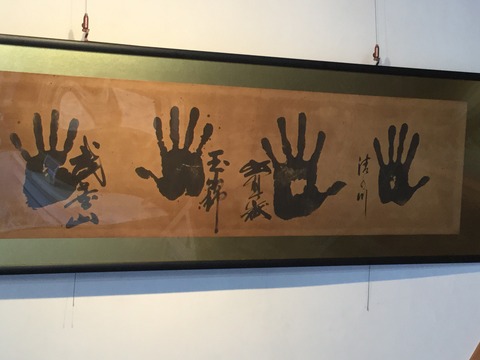